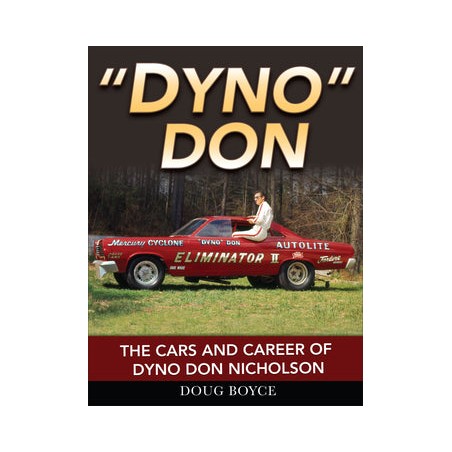 Dyno Don - The Cars and Career of Dyno Don Nicholson

Innovator, hard worker, pioneer, hard racer, tough competitor, a true gentleman, and a man you couldn't dislike... these descriptions of Dyno Don are shared by his colleagues and competitors throughout the course of his hall of fame career.

By the time CJ Hart opened America's first dragstrip at Santa Anna, California, in 1950, Pasadena resident Don Nicholson was already a seasoned pro. Don and like-minded souls regularly raised the ire of local authorities by racing the streets of Southern California, and running the Los Angeles river. After World War II they hit the abandoned airstrips. From humble beginnings grew a career that spanned 60 years. "Dyno" Don and his long list of drag racing accomplishments made him one of the most recognised and respected figures in the sport's history.

Don teethed on Chevrolets and established his reputation with the brand but when General Motors pulled out of racing in 1963, Don surprised many by taking up an offer from Lincoln-Mercury. Going from a Chevy to a Mercury? Back when brand loyalty really meant something, a move like that just wasn't done. Nevertheless, Don showed them that it could be done, and with great success. In drag racing, just as in life, "can't" just wasn't in Don's vocabulary. He paved his own way and the road led to three world championships.

From Stockers to Funny Cars, Don conquered them all, and in convincing fashion. His versatility saw him win national events in six different categories while his match race prowess saw him win more than 90 percent of his battles. He did it his way and because of that, few drag racers are as revered as Dyno Don.